IMPORTANT! If you purchase via one of the affiliate links, I may receive a commission but at no extra cost to you. Thank you for your support. Learn more.

ThermoPro, also known as Intek or i-Tronics, started as a private-labeling manufacturer for some of the biggest thermometer companies. Over time, they decided to branch out and develop their own brand, selling directly to the retail market.

The TP20 and TP08 are ThermoPro’s top-rated meat thermometers. The TP20 is an upgraded version of the TP08, with added features and better interface.

In this ThermoPro TP20 vs TP08 article, we’re going to compare these two thermometers and see which one you should buy and why.

Let’s begin with the unboxing.

The TP20 has an orange rubber outer case and a dark grey plastic inner core while the TP08 has the opposite. And that’s the only difference between the two transmitters. Other than that, they’re the same in terms of design and functionality.

In the back of the transmitters, you’ll find a thin wire clip that acts as a stand. If you turn it 180, it becomes a hook. This is also the location where the batteries go.

Moving on to the front, both transmitters have a small LCD screen that displays the temp of the two probes back and forth. Below that, there is a red dot that tells you the transmitting status between the transmitter and receiver. A bit further down, you’ll see a button to turn on/off the transmitters or switch between Farenheit and Celsius.

To the sides, there are numbers (1 & 2) to indicate which probe goes into which port. For the TP08, number 1 is for the food probe whereas number 2 is for the cooker probe.

Note: I once inserted the two probes into their opposite port and it actually worked, meaning the food probe went to number 2 instead of number 1, and the same for the cooker probe. Though I couldn’t use the low and high temp feature for the cooker probe on the receiver.

Now, both transmitters use a radio frequency signal to send information to their corresponding receiver. They’re splashproof so you can get away with a spill of beer or two. Furthermore, both don’t have any backlight, therefore you might want to bring a flashlight if you cook overnight.

Besides the transmitter, the TP20 and TP08 also have these same features below:

The first difference between the two thermometers is the probes. The TP20 has two identical food probes.

This is great for when you want to keep track of your steak and chicken at the same time. But if you want to do some low n slow smoking, you can also use one to monitor the internal temp of your cooker with no PROBE-lem at all.

For this reason, The TP20 does include a probe clip. That said, I think that the food probe is way longer than any regular cooker probe, which takes up a lot of space if you happen to have a smaller grill.

Now, these two probes are completely straight, solid, and made of stainless steel. They’re 6” in length with a pointy end, which is great for penetrating into the center of the meat. They also have a 2” grippy handle. I also like the fact that they come in a protective plastic case. A nice touch from ThermoPro.

However, there is no label to distinguish between the two probes. I struggled to find out which probe was which in the beginning.

The TP08, on the other hand, has a food probe and a cooker probe. The food probe is similar to the TP20’s. The cooker probe is a wee shorter, at 3” long, with a duller end and no handle.

You can’t monitor two types of meat simultaneously. But it’s easier to distinguish between the two probes and the TP08 receiver does show you which probe is which.

The second difference between the TP20 and TP08 is their receiver and its features.

Similar to the transmitter, both receivers have their own distinct color combo. In the back, they have a belt clip that can hang on to your pants. There is also a small tab that holds the clip in place, turning it into a stand. You can also open up the clip and install your batteries there.

In the front, they have a larger LCD screen than the transmitters. It’s backlit with bright color (yellow for the TP20 and orange for the TP08) that makes it attractive to look at during the night.

Now, the TP20’s screen is bigger than that of the TP08. It has three sections, with the first one showing you different settings while the second and third showing the temp of the two probes. The numbers and letters on the screen are clean and easy to read.

In terms of features, the TP20’s receiver allows you to set a countdown timer, which you can set to remind you when to add more wood or charcoal. You can also set a countup timer. That way, you can check how long the cook has been going. The timer is available in both hr:min and min:sec.

And when the timer is up, there is an alarm that notifies you. The sound that it makes is loud enough that you can hear it over your TV noise or similar. In case you can’t hear it, the screen flashes so that’s a nice bonus.

The alarm also rings when your TP20 receiver loses connection with its transmitter. The same thing happens when your food hits its desired temp or your cooker goes above or below a certain threshold.

Speaking of temp, the TP20 features USDA-approved pre-set temps for 9 types of meat and 5 levels of doneness. This comes in handy when you forget the target temp for certain meat, especially if you’re new to grilling and barbecuing. You can also set your own target temp if you like.

Note: You can set a low and high temp threshold for your cooker if you decide to track that instead of another meat on the TP20. One caveat here is that you can only do it on probe 2. Here is the process to do so.

Step 1 – Keep pressing MODE until you switch to Probe 2.

Step 2 – Keep pressing MEAT until you switch to BBQ under the Probe 2 tab.

Step 3 – Look at the third section of the screen, you will see a temp set on the left with an alarm icon. The default is a high temp (HI). Use the up and down button to adjust to whatever you like.

Step 4 – Hit TASTE to switch to a low temp (LO). Again, use the up, down button to adjust.

Bonus – If you don’t see the alarm icon, hit the button in the middle (with CLEAR) and that will set it for you.

The TP08, on the other hand, only has two sections on its smaller screen. The first one is for the food probe and the second is for the cooker probe.

Similar to the TP20, you can set timer and alarm with the TP08. However, the TP08 timer is only available in hr:min format which I find somewhat limited. The alarm sounds similar to the TP20 but the screen doesn’t flash when the alarm beeps.

In terms of temp settings, you won’t find any pre-sets in the TP08. Therefore, you have to set them yourself, both food target temp and a temp range for your cooker. One good thing is that the receiver will save your data so you don’t have to set it up again. The TP20 also has this same feature.

Now, the ease of use is tied into the receiver, especially the buttons below the LCD screen, since you will be spending most of your time with them.

Both thermometers’ buttons have white and bold fonts. They’re easy to see and press on even though the noise they make can be irritating for some.

I find the buttons on the TP08 are harder to get used to. It’s because they are mostly multi-purpose. It will take a while until you master the interface of the TP08 receiver.

Price-wise, the TP20 costs more than the TP08 but not by much.

Which One To Buy?

Now that you understand the comparison between the ThermoPro TP20 vs TP08 a bit better, which one should you buy?

Well, I like the fact that both the transmitter and receiver of the two thermometers feel hefty and grippy in my hand. I also like the color combo, especially the bright orange case of the TP20. It really makes the transmitter stand out among all my dark color grills.

Both thermometers are easy to set up. Install the batteries and you’re ready to go. There is no app to download or password to enter.

The TP20 is more convenient with the preset temps. It’s also more user-friendly with better buttons and interface.

With the TP20, you can monitor the temp of two types of meat. Alternatively, you can track the temp of one food item and the cooker.

Because of that, you can use the TP20 for both grilling and barbecuing. I’d recommend the TP20 for any pitmasters and backyard cooks, from beginner to advanced.

The TP08 is also a good thermometer. It just doesn’t have all the bells and whistles of the TP20, thus simplifying the unit. What it does best is to monitor the temp of one type of meat and of the cooker.

The TP08 can also be a good secondary thermometer if you already own one. That said, if you’re instead looking to buy a new thermometer on a budget, the TP08 is a solid option that doesn’t break the bank but also provides enough features for many cooks to come.

The one complaint I have with it is its buttons and interface. Hard to grasp at first but it gets easier over time.

For the ThermoPro TP20, click here for more information on Amazon.

For the ThermoPro TP08, click here for more information on Amazon.

Now, if you’re still not convinced that either of the TP08 and TP20 is right for you, take a look at the Thermoworks Smoke. 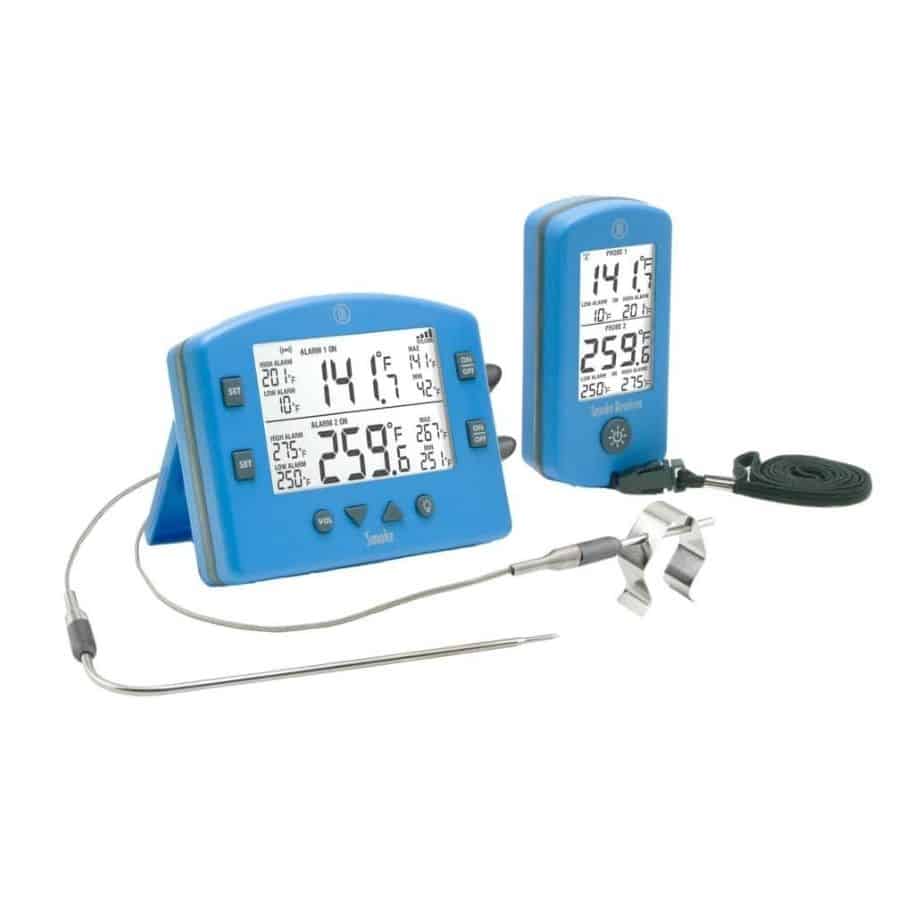 It’s one of the best meat thermometers on the market. This unit is solid and well-built. It features a large screen with proper back light and large digits. There are less buttons to press on and the overall interface is easy to understand and use.

This unit is also accurate and reliable. It comes in different colors and has a strong magnet in the back. So you can attach it close to the grill easily.

One problem with the Thermoworks Smoke is its price. It’s more expensive than both the TP20 and TP08.

Thermoworks official website is where you can find out more about this unit.

There you have it. Everything you need to know about the ThermoPro TP20 and TP08.

I hope you find this article helpful. If you have any questions, feel free to comment down below. Also don’t forget to let me know which thermometer you end up buying.

Thank you and happy grilling!

Cold smoking is a common method used to preserve and add flavor to food. Learn how to choose the best cold smoke generator so you also can do it at home. 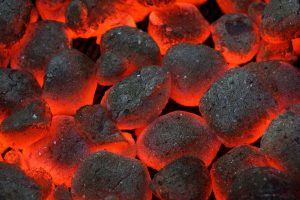