We’ve all been there. You just bought a new offset smoker and you’re about to smoke your first brisket. Everything is going well. Thin blue smoke is coming out of the vents. The temperature of the smoker is steady. And the internal temperature of the brisket is going up nice and slow. Just the way it’s meant to be.

But then 3 hours in, the temperature of the meat suddenly stops. You freak out a bit. Dinner needs to be served soon. Your spouse and kids will be home in any minute. So, you do what any sane man and woman would do — you crank up the heat of your smoker.

Yet, nothing happens. The dang thing won’t even budge. You’re sitting there and scratching your head. What the hell is going on, dude?

You’ve just encountered the BBQ stall, my friend! So today, you and I will go deep into the magical land of low n slow and uncover the truth about this phenomenon. What really causes it? And is there any way to beat it?

What Is The Stall?

The stall is a BBQ phenomenon where a large cut of meat (usually brisket or pork shoulder) stops rising in temperature after the first 2 to 3 hours of cooking. In some cases, the temperature even drops a few degrees. This is where this phenomenon freaks out a lot of folks, especially if they’re new to smoking low n slow.

Also known as the zone or the plateau, the stall can continue for up to 6 hours before the meat’s temperature starts going up again. I’ve included a chart below to better explain this whole event for you. Please keep in mind that it’s only for general illustrative purposes and not based on any particular cut of meat. That being said, the line should be similar in most cases.

As you can see, zone A is the first phase of the cook. It’s when you place the meat on the cooker, letting the smoke and fire do their thang. The cooker’s temperature is around 225F. And the meat’s temperature goes up slowly and steadily.

The internal temperature of the meat hits a certain point. I can’t tell you exactly where because it depends on many factors, such as the size and shape of the meat or the cooker setup. But it’s somewhere between 150F to 170F, with 160F usually being the norm.

The temperature stays there for a while. This is when the stall occurs as it’s represented as a straight line in zone B. Zone C is where the stall ends and everything continues normally.

Why Does It Happen?

Now that you know what the stall is, let’s understand why this phenomenon happens.

You see, we use energy in the form of heat to cook our food. So one would assume that the reason why the meat stops rising in temperature is because of some forms of heat loss. After all, what else cooks the meat?

Keep in mind that large cuts of meat, such as brisket and pork butt, have a lot of collagen and fat. That’s why many pitmasters attribute the heat loss to the collagen melting and fat rendering. Also, don’t forget that the proteins in meat start to denature or break down at around 105F.

These processes certainly need energy or heat. They will take away some for the time being, which causes the stall. And once they’re finished, the cook would resume as the heat goes back to cooking.

They all make sense, don’t they? However, nothing could be further from the truth.

What Is Really Happening?

So, what is the real science behind the stall then?

The answer is evaporative cooling. Let me explain.

The meat starts off cold before cooking. When you put it on the cooker, the heat from the fire would warm up the exterior of the meat, then slowly work its way to the center.

Remember that the meat also has its own moisture, trying to get out through the meat’s surface. The moisture, however, meets the heat there and evaporates as a result. At first, everything is fine and dandy.

Until the evaporation rate catches up with the heat input as the internal temperature of the meat hits its threshold (150F to 170F). Here, you have two equal opposing forces that don’t want to give in to each other. The cold moisture wants to get out but the hot heat won’t let it and vice versa. So the meat’s temperature just stalls there.

But thanks God, it won’t stay like that forever. That’s because there is only a limited amount of moisture in the meat. Once the moisture on the meat’s surface is completely gone, all hell breaks loose. The heat just busts through the weakened cold wall and marches right into the core of the meat. And the rest is history.

With that being said, not all moisture in the meat evaporates after the stall. Some of it is tied up in the proteins, collagen, and fat. It remains there to help with denaturing, melting, and rendering. So we can end up with some juicy, tender, and mouth-watering BBQ.

How Long Does The Stall Last?

In general, a pork shoulder stall or brisket stall can last up to 6 hours. It sometimes can be 2 hours, but 4 hours is usually the average.

Each piece of meat is different so the length of the stall varies as well. I’m talking about the size and shape of it, not to mention the moisture content, the surface texture, the rub, and whether or not you’re using any injection.

We also have to take in account the cooker setup. If you use a drafty smoker, chances are the stall can be shorter since the extra airflow can speed up the evaporation. On the other hand, some smokers are so tightly sealed that there might be no stall at all.

Next is the humidity, both outside and inside of the cooker. You might experience a longer stall on a hot and humid day compared to a dry one. You might spritz or mop your meat, not to mention using a water pan, when smoking. That can extend the stall since the extra moisture sits on the surface of the meat, waiting to evaporate.

Last but not least, the temperature of the cooker also plays an important role in effecting the length of the stall. The higher the temperature, the shorter the stall and vice versa. That’s because the heat is way more powerful than the moisture evaporation in this case. It can easily overwhelm the other in less time.

Whatever you do, always try to control as many variables as possible. That way, the stall is more predictable and the cook is more consistent.

How Do You Beat The BBQ Stall?

Wrapping The Meat In Foil

The first option to beat the BBQ stall is to wrap the meat tightly in foil, with a bit of fluid. This technique is also known as the Texas Crutch. Now, a few things to keep in mind.

One major problem with the Texas Crutch is that there will be no hard and crispy bark after the meat comes out of the foil. That’s because it is pretty much braised inside the foil. Some people don’t mind it, but some people do. If you’re in the latter group, I’d recommend firming up the bark with direct high heat after unwrapping.

Another problem with wrapping in foil is that the smoke can’t get in, as I mentioned earlier. The workaround for this is to use pink butcher paper. This type of paper is porous compared to foil. So, smoke can still get in and impart its flavor. However, the downside is that moisture can also get out because the seal isn’t tight enough. Therefore, you might find that the stall will be a bit longer, but it’s definitely shorter than when you don’t wrap the meat at all.

Below, you’ll find a fantastic infographic from Traeger that outlines different wrap options mentioned above. It also has the the approximate cook time, the hardness of the bark, and the overall taste. And the meat here is brisket.

Now, the drawback of this technique is that the high heat might interfere with the collagen melting and fat rendering, which ends up making the meat dry and tough. This is especially true for the brisket flat, which contains less fat and collagen than the brisket point.

Therefore, I’d recommend using your personal judgments here. You can always wrap the meat if you have to.

As I mentioned earlier, some cookers, such as the electric smoker, are tightly sealed so that there is no stall happening at all. So picking up from that, what you can do is to fill any gaps you see in your own smoker. For example, you can buy a better gasket for your ceramic grill.

Keep in mind that if it’s too tight, it might be hard to develop any bark at all.

And If Time Permits

If you have a whole day for yourself, you might want to go the old-fashioned way. No wrapping. No hot n fast. No sealing your smoker. Just you, your beers, your patience, and time.

If You Don’t Know, Now You Know

So that’s the BBQ stall for you. It will always be there. Please don’t freak out on it. It’s just a part of the process. If you don’t know how to deal with it before, now you know.

And if you have any questions or other tricks on how to beat the stall, please feel free to chime in and let everybody know. We’re always looking to learn new things from everybody in the BBQ community.

Also, if you don’t mind, please consider sharing this article on your favorite social media networks. It’ll certainly help grow this website. For everyone who is reading this, I appreciate you all. 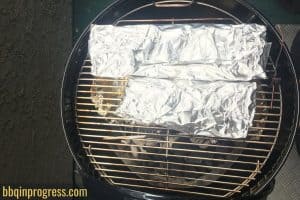 Texas Crutch – What It Is? Why Use It & Is It Necessary?

The Texas crutch is a great skill to have in your grilling/smoking repertoire. If done right, you turn out some delicious dinner in record time. But is it necessary all the time? Learn more here. 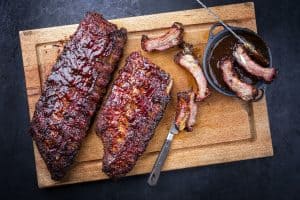 Learn the different types of pork ribs (baby backs, spares, St. Louis & more). We also include tips on how to buy them & a quick tutorial on how to cook them.