Reverse Sear: Is It The Best Way To Steak Valhalla?

Sometimes in life, doing the opposite yields a better result. It might not be true most of the time. But in the case of cooking a perfect steak, that statement is actually true.

Is this technique the best, if not foolproof, way to reach steak Valhalla? Well, let’s find out about that in this article.

What Is The Reverse Sear Technique?

The reverse sear is a cooking technique where you slow-roast a steak first. Then finish it off with a scorching hot sear. Also known as ‘sear in the rear’, this method helps the steak achieve a consistent doneness from edge to edge, with a crispy beautiful reddish brown exterior.

Now, what many folks usually do is to sear the meat first, then move it to a grill to slow-cook to a specific internal temperature. This method works fine if you have the experience and know what you’re doing.

However, the issue is that the outside of the meat can get overcooked, which in turn dries out or even burns. What the meat ends up with is a dry and blackened exterior with an inside ring of different doneness. In other words, it hasn’t been cooked properly.

As you can see, reverse searing flips everything upside down. And the reason why it’s better is because of water and heat. You see, meat is about 75% water and water is actually a good insulator. Because of that, it’ll take a while for heat to reach the center of the meat, especially if it’s over 1” in thickness.

If you sear first, then all the heat will build up at the meat surface, then slowly be transferred to the core. Leave the meat on the searing zone for too long, you just end up drying out the surface. All the while, the heat hasn’t had enough time to reach the center.

But when you reverse the order, the heat has enough time to cook the inside of the meat thoroughly and evenly. Since the ambient or cooking temperature is low, the buildup at the surface is less so there is no severe drying out. Later on, that slight dryness will actually prime the surface for that magical Maillard browning when you hit it with high heat searing.

To conclude, reverse sear is the best, if not foolproof, way to reach steak Valhalla — properly cooked inside with a sizzling crust outside. Woo!

By the way, most steakhouses use this technique. And they don’t even tell ya!

Who Created The Reverse Sear Method?

Nobody knows who exactly invented this wonderful technique. It’s one of those things that was developed by many people around the same timeline. Meathead of Amazingribs.com has a detailed article on the history of the reverse sear.

Below, I’ll just give you some key events. It all started with the sous vide cooking method.

Did You Know? Sous vide is a culinary technique where you put your food in a tight sealed plastic bag. Then place the bag in a temperature-controlled water bath to cook for hours on end.

Why Should You Try Reverse Searing?

As I mentioned earlier, you want to reduce the buildup of heat at the meat surface as much as possible. That way, you won’t burn it and also allow the heat to be gradually transferred to the core of the meat. As a result, the inside is cooked more evenly and you end up with a juicier and properly cooked piece of meat.

There is an enzyme in meat called cathepsin. What it does is to tenderize the meat as it ages. That’s why dry-aged meat is tastier and more tender than fresh one.

When you store the meat in the fridge, this enzyme is slow and somewhat sluggish. However, once you start applying the heat, the activity of cathepsin speeds up. When the internal temperature of the meat hits 122F or 50C (at the RARE doneness), the enzyme just stops working. Therefore, you want to prolong this time period to ensure that the meat is as tender as possible.

Using the reverse sear, you allow cathepsin to slowly break down the meat tissues at a low temperature. On the other hand, if you sear the meat with high heat first, all the cathepsins haven’t had enough time to go to work before the heat eliminates them all.

Now, low heat means longer cooking time. This actually gives salt enough time to penetrate deeper into the meat, bringing out more flavors as a result. It also gives meat plenty of time to take in the wood-fired smoke if you choose to cook with it.

To get a good browning, the surface of the meat has to be dry. That’s because moisture is no bueno for the Maillard effect.

Remember when I said the heat buildup at the meat exterior is less when reverse searing? Cooking with low heat first does dry out the exterior, but not to the extent of being bone-dry or burnt. And being a bit dry like that actually prepares the exterior for a better Maillard browning.

The reduced heat buildup also allows the exterior to take in more heat as you sear the meat after. In other words, if you’re not happy with the color, you still have room to sear the exterior without burning it.

Only Rest Meat Once

When the meat reaches the right internal temperature, you would want to remove it off the grill while cranking up the temperature. This is the perfect time to let the meat rest.

Keep in mind that meat is still cooking even after it’s off the grill. It’s a concept called carry-over cooking. That’s why you want to take the meat off about 10F to 15F below your target temperature.

Once the grill is up to searing temperature, simply put the meat back in and give it one hell of a sear. Then after that is done, you just have to dig in. There is no need to rest the meat again since it’s already been done.

Have A Reliable Cooking Process

With reserve sear, it’s easier for you to hit your desired temperature slowly without overcooking the meat, thanks to the low heat. Compared to searing first, the time window from raw to just right has been expanded. That way, you don’t have to rely on your judgments or experience, but more on a reliable process.

Reverse searing is indeed removing all the guesswork and making cooking more fun and predictable. And best of all, you get all the praises from your friends and family for a tasty meal.

Finally, you can use this technique to cook multiple steaks with varying degrees of doneness with style and accuracy.

Is There Any Downside?

Despite being a surefire way to cook meat and other food items, the reverse sear does have two drawbacks.

Obviously, the first one is that it’s really time-consuming. In my experience, it can take up to an hour from start to finish. Some folks have time for that while some don’t.

The second one is that reverse searing won’t work with thinner food, with less than 1” in thickness. Let’s talk more about that in the next section.

For What Types Of Food?

The reverse sear works best for thick food (1” and above), which is usually thick steaks in this case. Think ribeye, tomahawk and the likes.

The method also works for pork chops, baked potatoes, and poultry. For poultry, such as turkey and duck, you might have to slow cook even longer at first. That would allow the heat to penetrate all the meat and bones.

For thinner food, such as flank steaks, reverse sear would just dry everything out. The traditional high heat searing would work really well with this type of food.

Reverse sear requires some time and patience. If you’re short on time, you might want to try something else or cook different things.

How To Reverse Sear Steak On A Grill

Personally, I prefer just salt and pepper. That would be enough to bring out the flavor of the steak. That said, you can use whatever rub that you want.

Once you finish seasoning the steak, you have two options. Number one, you can wait for about 30 minutes and get cooking after that. Number two, you can leave the steak in the fridge uncovered overnight. That way, the cool circulating air of the fridge will dry out the steak surface, priming it for the cook the following day.

#2 – Get The Equipment Ready

You should get a quality instant-read thermometer. The one with a pointy and thin tip. The reason is because there will be no large probe marks when you check on the temperature. Speaking of, you should only stick the probe into the meat once or twice. Doing more than that, you will risk losing some of the juices.

Then you should have your grill. Anything works, really. You can do the reverse sear on the gas grill, charcoal grill, kamado, and even pellet grill.

Set up a two zone cooking method. For example, on a gas grill, turn on the burners on one side while leaving the other side off. On a charcoal grill, push the coals onto one side and leave the other side empty. With a kamado grill, place your heat deflector in between the fire and the cooking grates.

Depending on what type of grill you have, adjust the temperature controller and bring the internal temperature of the cooker to about 225F. That should do it for the preheating.

Once your grill stabilizes at 225F, put your steak on the low heat or empty side. Close the lid so you have the convection cooking going. Drink a beer and we wait.

Check the internal temperature of the meat using the thermometer. Once it hits 10F to 15F below your desired one, remove the steak, cover it with some foil, and let it rest.

Meanwhile, you should start cranking up the temperature of your grill. After it reaches the right searing temperature, put the meat back on. Sear each side 3 to 5 minutes. Don’t forget to do the edges as well.

Well, what more can I say? Bon appétit!

What’s New BBQ has a great video detailing the whole process of reverse searing a tomahawk steak on a Weber charcoal grill. Enjoy.

After trying reverse sear a couple of times, I guarantee that it will become your favorite way of cooking steaks, especially the thick and expensive ones. Just remember not to use it with thinner steaks. It will just dry them out.

So, what do you think of this new technique? If you have any questions, please feel free to let me know down below. 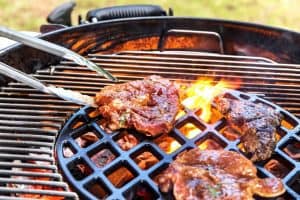 Stainless Steel Grill Grates vs Cast Iron – Which One To Buy?

This is the ultimate showdown between stainless steel grill grates vs cast iron. Learn about the differences between the two so you can pick the right one. 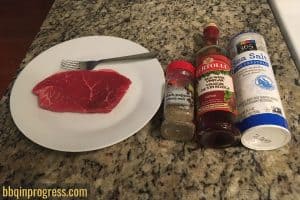 Should You Pierce Steak Before Marinating? Why & Why Not?

Should you pierce steak before marinating? In this article, we’ll attempt to provide an answer to this question.