Resting Meat: Is It Necessary or Not?

Resting meat is allowing it to cool after cooking. Many folks say doing so makes the meat juicier and more flavorful. Others beg to differ, stating that it’s not necessary at all.

Well, we’ll take a closer look at each camp and see what sort of experiment they’ve conducted to back up their claim. Then we’ll conclude for ourselves using the information from the experiments as well as some common sense.

Along the way, we’ll also show you this cool little trick.

According to Meathead Goldwyn of Amazingribs.com, he doesn’t think that resting meat is necessary. He had Dr. Greg Blonder, his science advisor, conducted an experiment to prove that the amount of juices retained due to resting is insignificant compared to no resting. In addition to that, Meathead also gives several logical reasons why resting meat isn’t a good idea. They are…

This is the overview of Dr. Blonder’s experiment.

He started with two 13.5-oz ribeye steaks. Each is about 1.5” thick. He then cooked them to 125F, which is the rare doneness. Once that was done, he immediately sliced one steak into strips while letting the other rest for 30 minutes before cutting.

With all the juices oozing out on the cutting board and the meat surface, Dr. Blonder used a paper towel to soak them up. He weighed the wet paper towel on a sensitive scale, then deducted the tare of the paper towel to get the exact weight of the juices.

The juices loss is about the same, isn’t it?

That means rest or no rest, there is no significant effect on the juices retention capability of the steaks.

Kenji López-Alt of Serious Eats has a different opinion. He believes that resting meat will retain as much juices as possible. He goes on to say that if you cut into the meat immediately after cooking, most of the juices will run out, leaving you a tough and chewy piece of “old leather shoes”.

To prove his points, Kenji ran an experiment where he cooked 6 almost identical steaks to the rare doneness (125F). He then removed them and started cutting one by one every 2.5 minutes. Each time, he would place the carved piece on a plate to collect any juices that ran out.

The steaks that rested longer had almost no juices on their plate whereas the one that was cut immediately had a large puddle of liquid.

Kenji’s rationale behind this experiment is to think of the muscle fibers inside the meat as a bundle of straws. Meat is 70% liquid and this liquid stays within these straws or muscle fibers.

The hotter the meat gets, the tighter the edges of the fibers. Because of that, the liquid or juices are pushed toward the center. Once you’re done cooking, these fibers are still tight. If you cut into the meat immediately, it bursts open the fibers and all that pressure forces the juices out.

On the other hand, if you let the meat rest, the fibers have a chance to relax and regain its equilibrium. The juices also have the time to move back to the edges. When you cut into the meat, only a tiny amount of juices comes out while the rest stays inside.

Jess Pryles of Hardcore Carnivore also believes the same theory similar to Kenji. She uses a sponge as her analogy for the muscle fibers. I’ve included Jess’ video explaining her stand on the subject here for your convenience.

Should We Rest Large Cuts Of Meat?

Notice that these two experiments above only used steaks as their subject. Now, steaks are considered a small cut of meat.

So, what’s about larger cuts of meat, say brisket, pork shoulder, and ribs? Do they benefit from resting at all?

You see, large cuts of meat are usually cooked to 200F because of the extra fats and connective tissues. They need that low n slow heat to really break down everything. Steaks, however, would be ridiculous to eat at 200F internal temperature.

With that in mind, remember Kenji’s theory about the hotter the meat, the tighter the muscle fibers in the previous section? It also applies to large hunks of meat.

If you cut into a brisket or pork butt immediately after cooking, everything will come out. Keep in mind that these cuts have more surface area when you slice them. Therefore, even more juices will leak out compared to a smaller cut like steak.

If you let them rest, most of the liquid plus the gelatin from rendered fat and melted collagen will remain inside the meat. And trust me, you do want those to stay. They’re what makes the larger cuts of meat so tasty, juicy, and worthy.

One thing I want to mention is that when it comes to resting larger pieces of meat, some people, especially in the professional BBQ world, don’t use the word “resting”. They prefer “holding”.

In fact, these two words do not have the same meaning. Resting happens in the open air. Whereas holding happens inside an oven or a warming unit such as an Alto-Shaam or a Cambro.

They even accomplish two different things. Resting achieves what we’ve been talking about throughout this article. Holding does the same thing, but it also allows larger cuts of meat to stay warm without risking any carryover cooking.

It’s just a little something something to keep in mind.

Ice Chest Comes To The Rescue

Now, one of those Cambros is expensive. For regular home cooks, I don’t see the point of buying it.

However, we can still replicate what the pros do — a technique called the “faux Cambro”. All you need is your typical ice chest or cooler, a few clean towels, and aluminum foil.

Here are the steps to hold your meat using the faux Cambro:

This technique not only allows you to improve the meat by holding, but it also provides some flexibility in your cooking. You can get the meat done and let it rest inside a faux Cambro. When it’s time for dinner, get the meat out and it’s still warm and juicy.

If you need a demo video, here’s a good one.

From the two experiments above, the test subject is steak, which is a natural product thus inconsistent to begin with. When you cook several pieces side by side, each might yield a different result when you cut into them.

Moreover, it’s unlikely that someone would eat a steak by slicing it in half or into several strips. It happens, but not that often. What you’d usually do is to start from one end and work your way toward the other.

Under normal circumstances, you probably don’t eat the steak right away after cooking either. You gotta make the salad, prep the table, and pour the wine before sitting down. By the time you start eating it, the steak already has enough time to rest. Still, you enjoy it without caring about all the juices on the plate.

So, why fret about rest or no-rest? It’s BBQ after all, right? Do what works best for you as long as you like what you cook.

That said, when it comes to larger hunks of meat, it’s advantageous that you do care about resting or holding them. Doing so will allow for a juicier and tastier meat. And even if you don’t have a special oven at home, you can always rely on the “faux Cambro” to keep the meat nice and warm for hours to come. 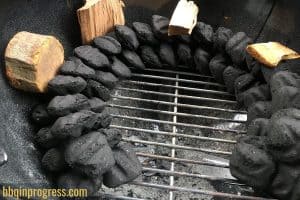 The Charcoal Snake Method – Turn Your Grill Into A Smoker

Wanna turn your Weber Kettle into a decent smoker? You should try the charcoal snake method. I’ll show you how to set it up properly. Click to learn more. 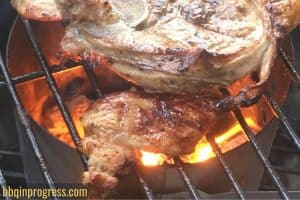 The Maillard reaction is the process of “browning” food. It gives food amazing flavor and inviting look. But there is more to it that you need to know.