Hickory Vs Mesquite – Which Is Better? And For What Food?

One of the key ingredients to amazing barbecued food is the wood. It’s what produces the smoke, which then lends the flavor to the food. But not all smoking woods are created equal.

Some are stronger while some are milder. Not to mention that each wood affects different types of food differently.

Of all the woods, there are hickory and mesquite. Hickory is known to be the king of all smoking woods. However, mesquite is considered the strongest of them all.

So, which one is better? And more importantly, for what type of food?

Let’s find out in this ‘hickory vs mesquite’ article.

A Brief Lesson About Smoking Wood

There are two types of wood – hardwoods and softwoods. To tell them apart, hardwoods produce seeds with covering, say a fruit or a nut. Whereas softwoods have their seeds uncovered.

You can’t smoke food with softwoods. Reason being that they are airy woods with a lot more sap and resin, which makes them burn fast and releases an acrid smell when combusted.

Hardwoods are more dense and slow burning. They also have more lignin than softwoods. Lignin is an organic material found in plants. When burned, it is what gives you that BBQ smokey flavor.

Now, you will like the flavor of some hardwoods while disliking the others. Furthermore, some will complement the food you’re cooking while some just don’t. In fact, there is a spectrum within the smoking hardwoods, categorized by the strength of their flavor.

Wood smokes are similar to spices. Each imparts a unique flavor that can either ruin or enhance a dish. Not to mention that wood smokes can also add color to your meat. Some are dark vivid crimson color while some are a wee lighter.

Therefore, choosing the right smoking wood is crucial. Nothing destroys BBQ faster than picking the wrong one. You can use only one wood or mix them up together. Also don’t forget to consider other ingredients such as the seasonings and the meat itself.

Hickory smoke has a nice nutty taste, to which some people associate it with bacon. It’s also sweet and hearty. If you grew up in the Southern USA or have tried any of the traditional Southern BBQ, you’ll probably recognize the taste of hickory smoke.

Most people like hickory. If you’re new to smoking or have only used fruitwoods, you’ll probably need to take it easy on your first time with hickory. It might be too strong or pungent for you and your family. The best course of action is to continue using your fruitwoods and slowly add a small amount of hickory to the mix.

Once you get used to it, you can then proceed with only hickory. However, it’s still considered a strong-flavored wood, so be mindful if you use too much hickory. It can lead to a bitter flavor in your food.

When burned, mesquite wood produces a defined taste and intense flavor. If used too much, it can be sharp and bitter, but bold and earthy if used with just the right amount. Moreover, mesquite wood flavor is one of those tastes that you can easily recognize within the first bite.

Mesquite is plentiful in the Lone Star state. Therefore, you will find its presence in many Texan BBQ dishes. The wood is actually one of the hottest burning trees. It also burns fast, with a lot of smoke and sparks as it burns.

If it’s your first time trying mesquite, use it with beef but sparingly. Red meat can take its smoke without getting overpowered unlike other lighter protein sources. Another way is to blend it with other fruitwoods. Do this until you get to know the taste of mesquite smoke. And please don’t use it if you have other people over for dinner. Not everybody is going to appreciate the mesquite flavor.

Hickory Vs Mesquite, Which Is Better?

Just like everything in BBQ, it all comes down to personal preference.

Hickory is a more versatile smoking wood than mesquite. It’s great for pork (e.g. 3 2 1 ribs) and all red meats. With fish, poultry, and even vegetables, you might want to use only a small amount or mix with other fruitwoods. Hickory also burns long and clean, making it a perfect choice for any low n slow cooks.

Mesquite, on the other hand, is only suitable for certain types of meat, such as wild game, beef brisket, duck, and lamb. It however might be too powerful for chicken, fish, ribs, and even pork shoulder. Mesquite does add some color to your food, but generally it’s lighter than the rich, carmine red color that hickory imparts.

As mentioned earlier, mesquite also burns hot and fast. Therefore, it isn’t ideal for smoking low n slow. Combined with its strong flavor, it’s best to add mesquite at the beginning or toward the end of the cook or blend it with other weaker woods.

All in all, some folks love mesquite and use it all the time. Whereas some just can’t stand the smell of it. Hickory, otherwise, is generally more accepted by the majority of the population. It’s already in a lot of the traditional BBQ dishes.

Keep in mind that mesquite has about four times the lignin compared to hickory, which greatly affects the final smoke flavor. Therefore, it’s easy to over-smoke with mesquite (so use it sparingly), but hickory is a lot more forgiving.

Can You Mix Hickory And Mesquite?

The short answer is that you can mix hickory and mesquite together. That way, you have a blend that is stronger than hickory but lighter than mesquite. Sort of earthy but sweet and mellow.

Now that you know the differences between hickory vs mesquite, it’s time for you to try them out to see which one you like better.

We’d highly recommend taking notes of the flavor of each wood as well as the kind of meat that you used. By doing so, you create a personal smoking guideline that is just for you.

Don’t forget to only smoke with quality wood, meaning no mold, no fungus, and no chemically-treated wood. Also stay away from softwoods. Last but not least, don’t over-smoke your food. More isn’t always better.

If you find this mesquite vs hickory article interesting, please consider sharing it to your friends and family. We’d really appreciate that.

Most people think that grilling and barbecue are the same. Some beg to differ. So are they the same or different? Learn more in this grilling vs BBQ article. 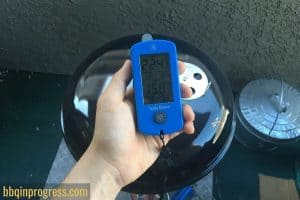 Today, we’ll go deep into the magical land of low n slow and uncover the truth about the infamous BBQ stall. It’s time to stop stalling & get right to it.