When talking about outdoor cooking, most people think that grilling and barbecue are the same. While that might be true for people around the world, these two styles are defined differently in the US, especially for people from the South.

I didn’t know about this when I first got into outdoor cooking. But the more I learn, the more I realize. So to save you the trouble, I put together this grilling vs BBQ article.

A Long, Long Time Ago

Cooking over live fire has been around for a long, long time. Fire makes it easier for humans to digest food since fire breaks down all the compounds in it. And that gave humans time to hunt, socialize, evolve, and, of course, engage in coitus.

It was the earliest humanoids who bonked a woolly mammoth on the head and brought it home to their clan. They then tossed the meat onto the campfire and threw the first “barbecue” in human’s history. For all we know, cave women were probably the original pitmasters.

These humanoids quickly realized that the meat was tastier if it was placed away from the fire. So they proceeded to build wooden racks, where they could hang their meat to cook. They also learned that the flavor of the food was even better if they waited for the wood to burn down to charcoal before cooking.

Fast forward to the Age of Discovery when the Spanish explorers encountered the Taino tribe in the Caribbean islands. The Spaniards noticed that they used log stands to dry and smoke snakes, rats, lizards, fish, and other game meats. The purpose was to cook and preserve the perishable meat for later uses.

At the time, the Spanish explorers didn’t understand what the natives called this wooden framework, but to them, it sounded like “barbacoa”. According to some sources, the origin of the supposed barbacoa was actually barabicu. And it means sacred fire pit to the Taino people. Besides using the barbacoa for cooking, the Taino also used it for sleeping, shelter, and storage.

Over time, the barbacoa made its way to Spain. At first, people still referred to it as the cooking structure or device. But after a while, it became a word for the cooking style as well as the food cooked by it.

And as our world evolved, so did the word barbacoa. It transformed to “barbecue” in the English language. People also use different variations of it, from barbeque to BBQ to simply ‘cue. But the correct spelling still remains as barbecue with a “c”, which is derived from barbacoa or barabicu.

Its meaning also changed. Besides the original ones, it now means a party or cookout where barbecue is served or a flavor that resembles barbecued food.

BBQ Around The World

Many countries around the world have their own unique style of barbecue. The Argentine have their asado where meat is cooked on an open fire grill or parrilla. In Japan and India, they have been cooking their food in ceramic pots for thousands of years. They are called kamados in Japan or tandoors in India.

Barbecue even has different nicknames in different countries. A “barbie” in Australia or “braai” in South Africa, Namibia, Zambia, and Zimbabwe.

To people all over the world, barbecue means cooking food over live fire with smoke as the common feature. And that includes pretty much everything, from mud baking to pit roasting. And even grilling.

But in the US, barbecue means something different. To many Americans, barbecue or Southern barbecue (long, low n slow) is a way of life, a myth, a journey, and a part of American history. Although it wasn’t invented in the US, barbecue did have a flavorful development throughout its history.

Starting at the Southeastern coastline during the 18th century, this is where the origin of the true American barbecue began. It was the Eastern Carolina style with whole hogs roasted for hours on end over hot coals. The pork was then pulled and served with vinegar sauce and hamburger buns. Coleslaw was also included as a side dish.

As the European settlers moved out west, different regional and local barbecue influences began to take shape. The Dutch went to New York, The French moved to Canada and New Orleans, while the German remained in South Carolina. To this day, there are four major barbecue styles in the US: Carolina, Memphis, Kansas City (KC), and Texas.

You also find other influences such as Kentucky mutton (sheep) barbecue or California Santa Maria tri tip. Each region with their own characters and flavors. Each region defends its own style with fiery passion and fierce loyalty. That’s what really sums up American BBQ.

Unlike American barbecue, American grilling was a bit late to the party. Even though cooking over live fire has been around since the dawn of time, backyard grilling is more of a recent innovation.

Up until the 40s, most of the grilling was done during picnics and camping. After the Second World War, the rapid growth of the American middle class saw an increase in backyard grilling. The common grill during that time was the open style brazier grill.

With its design, this brazier grill actually had two drawbacks. It often burned the meat to a crisp without cooking it properly (didn’t they know the two zone fire back then?). Secondly, the wind could blow the hot coals all over the place, which is a fire hazard, because of the lack of lid.

Frustrated with this style of grill, George Stephen, a metalworker at Weber Brothers Metal Works, invented a better barbecue with a round body and lid. He also punched holes in the lid for better temperature control. George Stephen sold this grill to the public in 1952 and the rest is history. The Weber Kettle is still one of the best charcoal grills today.

But starting a charcoal grill usually takes time. And people often just want to cook something quickly. That’s when the Arkansas Louisiana Gas Company introduced gas grills in the 60s. Even though they are more expensive, gas grills slowly replace charcoal grills as American backyard #1 choice due to their convenience and ease of use. However, some diehard fans still prefer charcoal over gas because of its flavor.

Well, that’s a brief history of grilling vs BBQ in the US. To many Americans, they’re usually the same thing. To some, they’re not. So what really distinguishes the two?

Before we go into further details, let’s first go through the relationship between energy, heat, and different cuts of meat. I think it will help us better understand the differences between barbecue and grilling later.

Cooking is all about applying energy to the food until it is good for eating with desired flavor and tenderness. Energy creates heat. There are 3 types of heat that are used in cooking.

Meat varies in thickness. Usually, the thicker the cut, the more muscles, fat, and connective tissues it has (brisket, pork butt, etc.). Therefore, it requires low convection heat applied for many hours until it is cooked. It also needs a bit of radiant and conduction heat as well, but not much.

The first reason we need to use convection heat for thick cuts of meat is because of the collagen in the connective tissues. This protein will bunch up together if we apply high, intense heat rapidly, which is radiant and conduction. Whereas collagen will melt to gelatin if we cook it with low heat.

The second reason is because animals have saturated fatty acids as opposed to unsaturated ones like in olive oil. Saturated fats have a higher melting point so they need time to render in a low heat environment.

On the other hand, thinner meats (pork chops, chicken breasts, etc.) can be cooked fast with high, intense heat. The heat penetrates the surface and quickly moves into the center in a matter of minutes. The thinner meats generally have less collagen and fat thus don’t require that much time either.

By knowing which heat or energy to apply to a certain cut of meat, we can decide the better cooking style, i.e. grilling or BBQ, to ensure it’s edible yet tender and juicy at the same time.

The Main Criteria To Distinguish Grilling From BBQ

There are 6 main criteria to distinguish between barbecue and grilling.

Some people even use wood to cook. Yet, it requires experience and skills.

Gas grills are generally for grilling. Not a lot of people use gas to barbecue foods although some do. If you do, just make sure to have a backup tank.

Lids Closed Or Not

Grilling is done without any lid. That’s to prevent the convection heat from overcooking thin cuts of meat if you close the lid. However, you have to flip the food often to avoid burning the bottom surface of it.

Barbecue, however, is cooked with a lid closed. Remember that convection heat is important in barbecue. By closing the lid, the radiant heat from burning fuel reflects off the lid and in turn warms up the air surrounding the food.

You can use dry rubs and marinades for both grilling and barbecue. They will for sure add flavors to the final products. However, you will notice the flavors more in barbecue because the ingredients have time to penetrate and infuse the meat.

Similarly, you can also use BBQ sauce for both cooking styles. The only caveat is that this type of sauce contains sugar. Thus applying it beforehand leads to the burning of sugar. So the best course of action here is to brush the BBQ sauce towards the end of the cook, either grilling or barbecue.

Hopefully by now you understand the differences between grilling vs BBQ better. It comes down to the type of heat, the cooking time, the thickness of meat, and whether or not smoke is present.

To some, both cooking styles are the same while other people will vehemently argue with you that BBQ is not grilling. Like anything in life, always know your audience. You might get away with it if you live on the West Coast or anywhere else in the world. But if you’re in the Southern US, draw a line between the two.

So how do you define barbecue and grilling? 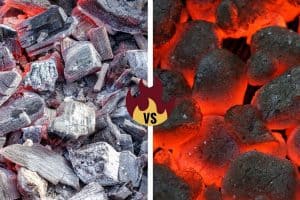 Lump Charcoal Vs Briquettes – Which One Is Better & Why?

Lump charcoal vs briquettes is one of the most heated debates in the barbecue world. So which one is better & why? Let’s find out. 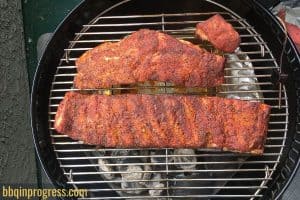 The 3 2 1 ribs method is a safe & effective way to make some incredible slabs of ribs. Learn more about the basics plus other variations of it in this article.

I’m not a competition pitmaster, just a regular dude who loves to grill & smoke food. My name is Thinh Phan. Learn more… 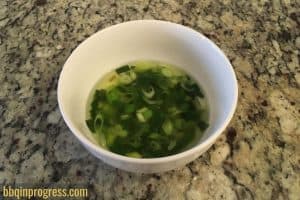 Copyright © BBQ In Progress, 2020. As an Amazon Associate, we earn from qualifying purchases.​