If you’re into South American cuisine, you’ve probably heard of the chimichurri sauce before. It doesn’t require anything special, just the typical ingredients you find at your local grocery store. Yet it gives an incredible burst of flavors to whatever you add it to.

You’ve probably seen many variations of this amazing sauce recipe. Around the Interwebs or just among your friends and family. Well, here I am.

This is my version.

What Is Chimichurri Sauce?

Chimichurri sauce is made with fresh (or sometimes dried) herbs. It’s a popular condiment found in South American asado, particularly in Argentina and Uruguay.

You mainly use it to drizzle on top of steaks, grilled meats, and other side dishes. But it can also be used as a salad dressing and even a marinade (don’t forget to pierce the meat before marinating).

With its deep dark green hue, chimichurri sauce not only adds a touch of color to your dish, it also provides a wonderful mixture of flavors that is to die for, from earthy and tangy to spicy and minty.

The most common one is the classic green chimichurri. It consists of the ingredients below:

The red version, on the other hand, is less popular than the green chimichurri. It still has all the things listed above, but with added red bell peppers and tomatoes.

Because of those two ingredients, the red chimichurri has a different color as well as a slight distinction in flavors and taste.

My Version Of The Classic Green Chimichurri

To begin, I’ll keep all the essential ingredients, except for the oregano. And I would replace it with peppermint. Although oregano also belongs to the mint family, I actually like peppermint better. It’s slightly mintier than oregano. As a result, it gives a stronger kick to the overall flavor of the final sauce.

I’d also like to add some cilantro to the mix. As a Vietnamese descent, I can’t live without it. You’ve probably tried the Vietnamese sandwich or bánh mì before? You know why it’s so good? It’s because of the cilantro (and well, of course, the pâté).

Now, the cilantro has a fresh, herby taste with a subtle earthy flavor. Because of that, I’d actually reduce the amount of parsley since it is already earthy. The end goal here is to have a harmonious blend of these ingredients. So you have to add and subtract here and there when needed.

Once you have everything, wash then use paper towels to dry them off. Then carefully chop each ingredient into fine pieces. I like a chunky texture in my sauce.

You can also use a food processor to speed things up if you’re short on time or prefer a smoother texture. There is no right or wrong here. Whatever floats your boat.

After that, put everything in a small bowl, drizzle the olive oil, mix all the ingredients together, and voila!

Do You Serve It Hot Or Cold?

I find that you should wait about an hour before using the sauce. That way, all the ingredients have the time to work together, enhancing the final flavor as a result. Of course, you can still use it as soon as you make it.

You also have the option of making it beforehand, about one to two days in advance, and store it in the fridge. When it’s time to serve, take it out and let it come back to room temperature. Then use it as you normally would.

I would prefer fresh over dried herbs. They will take a bit of time to chop. But they just taste better and the color is more vibrant.

That said, there is nothing wrong if you switch to dried herbs. I’ve seen someone making a chimichurri dry rub for their grilled meats before.

Again, it’s outdoor cooking after all. Experiment with different styles and see which one works best for you.

Thinh Phan
If you’re into South American asado, you’ve probably heard of the chimichurri sauce before. It doesn’t need anything special, just the typical ingredients you find at your local supermarket. Yet it gives an amazing burst of flavors to whatever you add it to.
Print Recipe Pin Recipe
Prep Time 10 mins
Cook Time 3 mins
Resting Time (optional) 1 hr
Course Side Dish
Cuisine South American
Servings 4 people
Calories 100 kcal 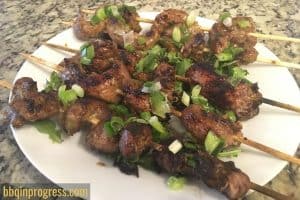 How To Make The Best Vietnamese Grilled Pork Skewers

This is the best Vietnamese grilled pork skewers you’ve ever found on the Internet.

How To Make Basic Campfire Cones At Home

I’ll show you how to make these simple yet tasty campfire cones, right from the comfort of your backyard or kitchen. Click through the link and learn more.