Afterburner Method – Searing Steaks On The Back Of An F-16

Searing steaks on the back of an F-16? That can’t be true.

Well, I know it’s a bit exaggerating but you’ll understand why soon. There is an actual way you can cook steaks to perfection, just by firing up a charcoal chimney. It’s called the Afterburner method (Afterburner and F-16? See the connection?).

Anyways, we’re going to learn more about the technique in this article, starting with its origin.

Who Invented The Afterburner Steak Method?

The credit would go to Meathead Goldwyn of Amazingribs.com. On a beautiful day a while ago, Meathead was cooking some ribeyes at his house. The steaks were about three quarters of an inch thick. And they were all seasoned up and ready for the grill.

While waiting for the coals to start on his charcoal chimney, Mr. Goldwyn noticed that it kinda looked like the backend or the afterburner of a fighter jet F-16. Reddish orange flames with a hint of blue.

Being curious and all, the man placed a cast iron frying pan on top and checked the temperature using an infrared thermometer. It was a whopping 800F or 426C! Scorching hot that was.

Meathead then removed the pan, put on a cooking grate, and threw one of the steaks on top. After less than 3 minutes on each side, everything came out perfectly, just like it was cooked at an expensive steakhouse.

The inside is dead on medium rare with a beautiful golden brown sear on the outside. I mean, fuggedaboutit!

After that day, a new method of cooking steak on a chimney starter was born. And it was named the Afterburner because the chimney looked like the backend of an F-16. Pitmasters everywhere, from regular backyard to Internet famous, would be forever grateful for that.

What Do You Need?

Obviously, the first thing you would need is a charcoal chimney. Any brand will do. Then you’d want to have some charcoal. Remember that there are briquettes and lump. They’re different from one another but either works.

You’d also need a cooking grate. Any kind, regardless of the size, is fine as long as it sits sturdy on the chimney. That’s actually a problem when it comes to the Afterburner searing method. The grate often slides back and forth as you cook the steak. I’ll show you a trick to ensure that won’t happen near the end of this article.

Since the popularity of this method, some companies actually come up with grates that fit the diameter of the chimney perfectly. They also have tabs to hold them in place, avoiding the stability issue mentioned above. If you’re interested, I’d recommend checking out the Chimney Griller by Unknown BBQ. Pretty neat stuff!

And FYI, my current setup is the charcoal grate of the 14” Weber Smokey Joe and the Weber Rapidfire. They’re a great combination. The grate is neither too small nor too big for the chimney.

Once you have all the tools, the only thing left is the meat.

For What Type Of Steak?

Meathead recommends using thin steaks for the charcoal chimney sear. Anything within ½” to ¾” in thickness, such as flank or skirt steak. These cuts are thin enough for the heat to cook to the center, without burning the outside to a crisp.

Anything thicker than an inch, you might run the risk of a charred steak. You want a golden brown exterior, not black. That being said, you can still combine the Afterburner and the reverse sear technique to cook thick steaks to perfection. More on that soon.

But let’s learn how to sear thin steaks on a chimney starter first.

Dry brine or season your steak beforehand. I’d like to use Kosher salt, but sea salt works fine too. Keep in mind that you shouldn’t add black pepper to the meat. That’s because the high heat will burn it, making it bitter at the end.

Once you’ve done that, let the steak sit so the salt can do its magic.

You would want to light about half a charcoal chimney. In my case, I use the Weber Rapidfire, so that’s about 3 to 4 layers top. That should be enough to get things done.

You don’t want a full chimney. It would be too hot. In addition to that, the steak will be too close to the fire, which will burn it real quick. Not to mention the time you have to wait until the coals are fully lit.

Half a chimney would suffice.

Don’t forget to place the cooking grate on top as well. This allows it to heat up alongside the chimney.

Before you get the meat on the grate, you need to pat it dry with a paper towel first. It is to prevent any water from vaporizing and cooling the meat surface as a result. You actually want to slightly oil the meat to help with the caramelization.

Once that is done, you would then put the meat on. Now, be very careful here and keep a close eye on everything. Remember that it’s nearly 800F or 426C, so the meat will cook really fast.

Flip the steaks every 2 minutes. I’d recommend using the timer on your phone. After a few flips, check the internal temperature of the steak using an instant-read thermometer. Depending on how you like your steak, I’d remove it as soon as it hits the right temperature. For me, I like medium rare so within the 130F to 135F (54C to 57C) range.

Let the meat rest for about 10 minutes. Don’t forget to put some aluminum foil on top. Enjoy when the steak is ready.

As I mentioned earlier, you can combine the reverse sear technique with the Afterburner grill method to cook steaks that are thicker than ¾”.

Reverse sear is where you cook the steak first with low convection heat to bring it up to the desired internal temperature. Then you sear it to achieve that Maillard effect on the outside of the steak. Done right, you’ll never worry about burning your steak to a crisp without cooking it properly.

To start, you would want to set up a two-zone fire on your grill. While waiting for the coals, season your steak. No black pepper. You can always add it later.

Once the coals are ready, place your steak on the indirect side. Cook it to whatever doneness that you like. Then remove and let the steak rest under aluminum foil.

Get another round of coals ready in the chimney starter. After everything is lit, which is about 20 minutes, get your steak on and follow Step 3 from the previous section. Remember not to leave the meat unattended.

Since you already let the steak rest, you can just dive right in after it’s off the grate. Add black pepper if you like and simply enjoy the fruits (or meats) of your labor.

One Problem (And Its Solution) With The Afterburner Method

After cooking on a charcoal chimney for a while, I find that the cooking grate isn’t always stable. It often slides back and forth as I move the meat around. Not to mention that my grate has a straight bar right across in the middle, which ends up creating an additional teeter-totter problem.

And we’re dealing with extreme high heat here. Not safe at all!

To fix this, what I would do is to mark where the straight bar meets the body of the chimney on both sides. Then use a Dremel to cut a slot in those two spots. Once that’s happened, the bar will fit right into the slots, which hold the grate in place. And that will eliminate the problems.

I’ve attached a few pictures to better illustrate the whole process. For the record, I actually learned it from Ryne of Cooking With Ry on Youtube. Gotta give credit where it’s due.

That’s the Afterburner method in its entirety. Sometimes, if you don’t want to start your grill just to cook a few steaks, this is the setup that you would want to use. It’s actually cool grilling on a charcoal chimney. So what not to like about it?

Have you tried this technique before? If yes, what is your experience so far? Feel free to share it with everybody here. 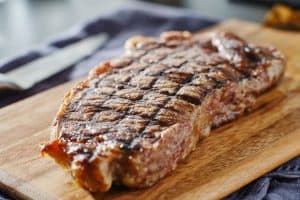 Resting Meat: Is It Necessary or Not?

Resting meat is allowing it to cool after cooking. Many folks recommend it. Others beg to differ, stating that it’s not necessary at all. Who to believe?

How to Dry Age Beef at Home: What, Why & How to Do It Safely

In this ‘how to dry age beef at home’ guide, I’ll show you the entire process of dry-aging, from what it is to why we should do it to how to do it safely.